Aledorn.
/ News - EN / The Road to the First Chapter of Aledorn

The Road to the First Chapter of Aledorn

Greetings and salutations, it has already been over a year since any last update, apologies for that, I found it more reasonable to focus on game development rather than PR, but at least I tried to find time for smaller updates that I post on our Facebook site. Anyway! Time has come to throw you a bigger bone and this time I have really something proper!

A lot has happened in the past ten month, like for example The Plague that impacted many things across the globe, our progress notwithstanding. Unfortunately I had to change jobs (events & entertainment industry has been uneventful and not much fun recently), which meant less time to do game development. We did not stop, no, but we had to rearrange priorities and even while Aledorn stayed on top of the pyramid, there were delays. Nevertheless, we kept pressing forward, as you will see for yourselves.

Among other things we spent a lot of time discussing possible early access, which could help us in two ways – get feedback from the community and secure additional funding. After much back and forth we decided to follow this path, though in a slightly unusual manner.
Aledorn is a massive game (even after we scratched some ideas), so we will divide it into chapters and early access will cover the first one. In total there will be three or four chapters that will be released over time.

Now let’s get to the first chapter. What will it contain, you ask? At this moment we have about 60 locations ready (exteriors, interiors and dungeons) and all of those will be present in it. It will also include all the core features, up to a point. Let me elaborate – I will use magic and skills as the example: Aledorn Chapter One will contain all the basic skills and spells of Basic and Advanced level. Expert and Master level skills and spells will remain locked and will be part of further chapters. Similar to classes, you will not be able to evolve your class in the first chapter. We still believe that Aledorn will be a good well-rounded experience comparable to many standalone games out there. For those who have been around for a bit: Think of Baldur’s Gate I. – your character progress was hard capped on seventh level and it still was a kickass game.

Now let’s get to the merit – what progress we made in the last 12 months? We will start with the usual – level design, which is about 90 per cent finished, at least as Chapter One goes. As mentioned in one of the earlier updates, the capital city – called Lim – is divided into four quarters, three of which have been revealed earlier. The fourth and final one is the Main Boulevard, where some of the most important landmarks can be found – the Castle, Temple, Library and the Warrior’s Guild to name a few.

Below the streets of Lim is the biggest single-story dungeon of the entire game – the massive Lim Sewers, which sprawl with all sorts of life. You can encounter various monsters, faction dwellings, secret stashes used for smuggling or passing on messages, etc. Sewers will be the stage of many adventures and you will visit its unsavoury depths on more than one occasion. 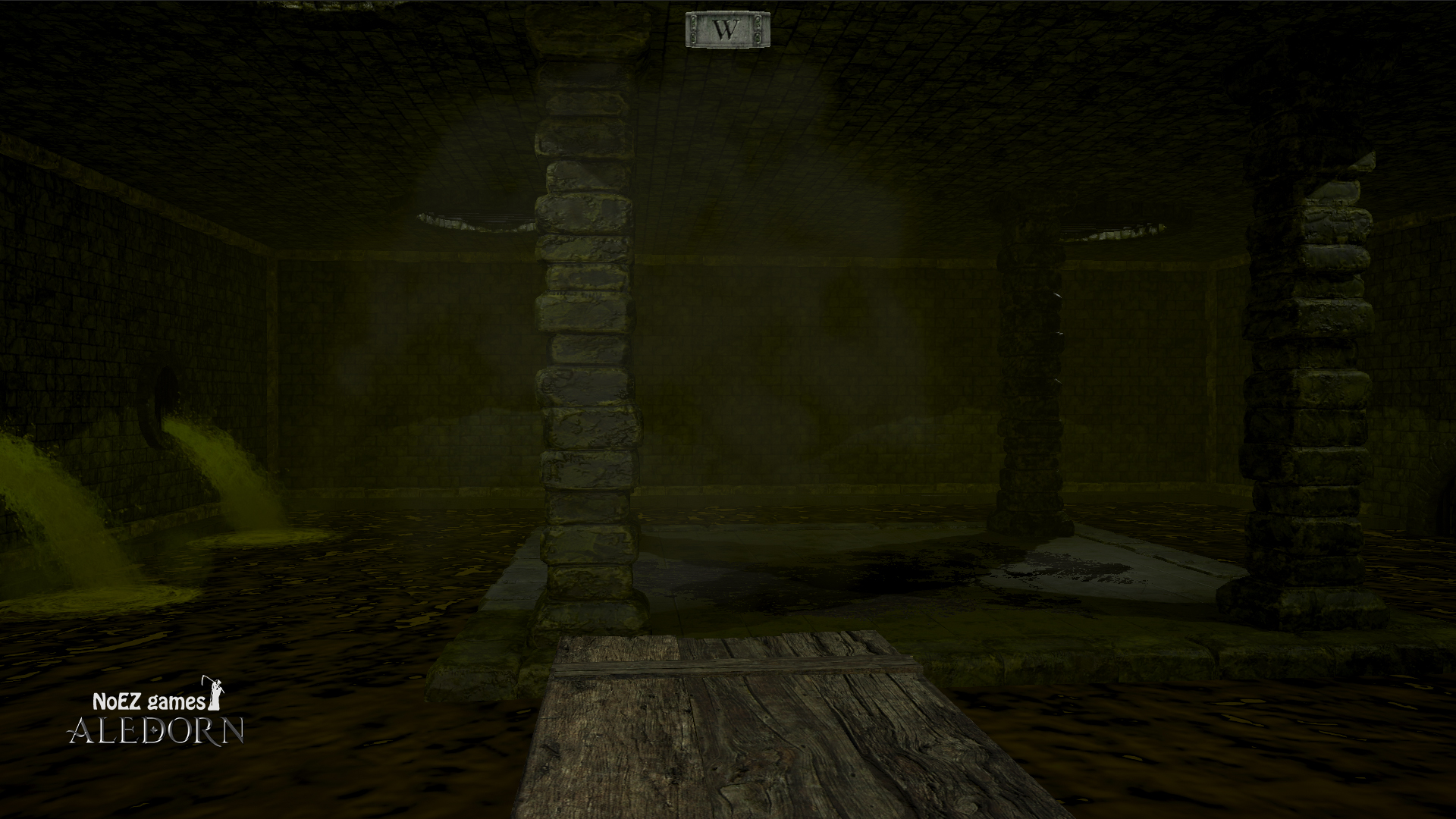 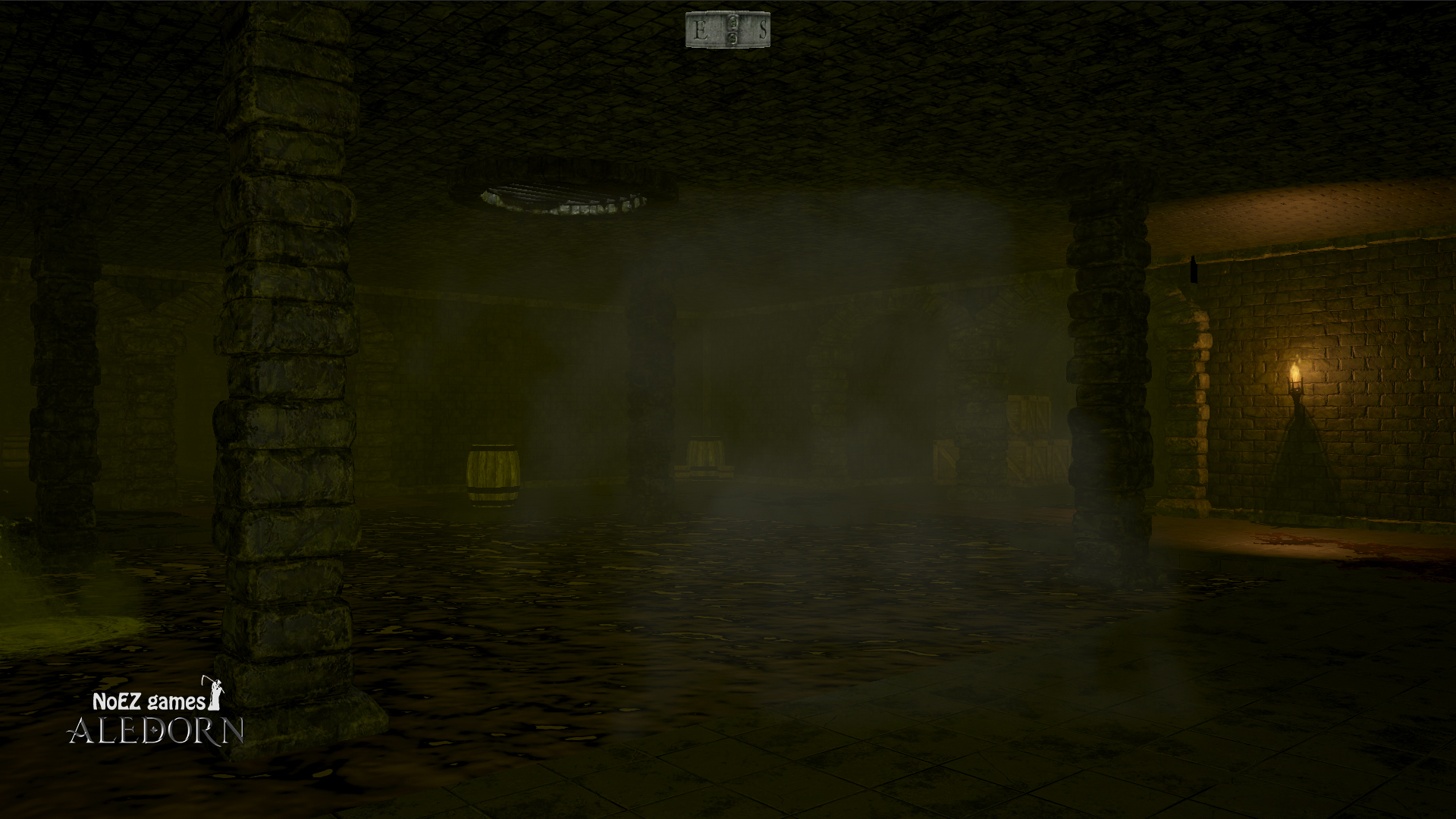 Apart from the four quarters, the capital will offer over 20 interiors where you will be able to barter, meet NPCs and get quests, which will yield some precious rewards you are so keen to get. Simply taverns, shops, guild halls (every class gets one) and others.

And of course, such an important city as Lim cannot be left with just one (albeit large) dungeon, there will be multiple ones. Just for explanation – by dungeon we mean any location to explore and fight in, not just your castle cellar, sewer and such. See some neat pictures below.

As you can see Lim is a big place where you will spend a lot of time (or at least we hope so), but now let’s move away from level design and have a look at other features that will be present in Chapter One.

We have made quite a progress on character models and clothing. Thanks to a combination of assets – coupled with hard work done by Daniela, Honza and Arb – we have over 10 different sets of armour at our disposal, various pieces of which can be combined freely.

The clothing parts are helmet, torso, bracers, gauntlets, pants and shoes, which you can mix and match to your heart’s desire. I will not describe in detail how much pain the clothing system containing dynamic scaling caused us (a LOT), but the final outcome is more than decent. See for yourselves.

As Aledorn is largely a dungeon crawler, we cannot forget to show you some of the dungeons we mentioned earlier, including various mechanisms, secret doors, stashes and puzzles. Check out the vid and pictures below.

Now let’s get back to samples of level design – see below screenshots of some of our dungeons you will come across throughout the game. There will be plenty of them, as they are one of the central pillars of Aledorn gameplay. 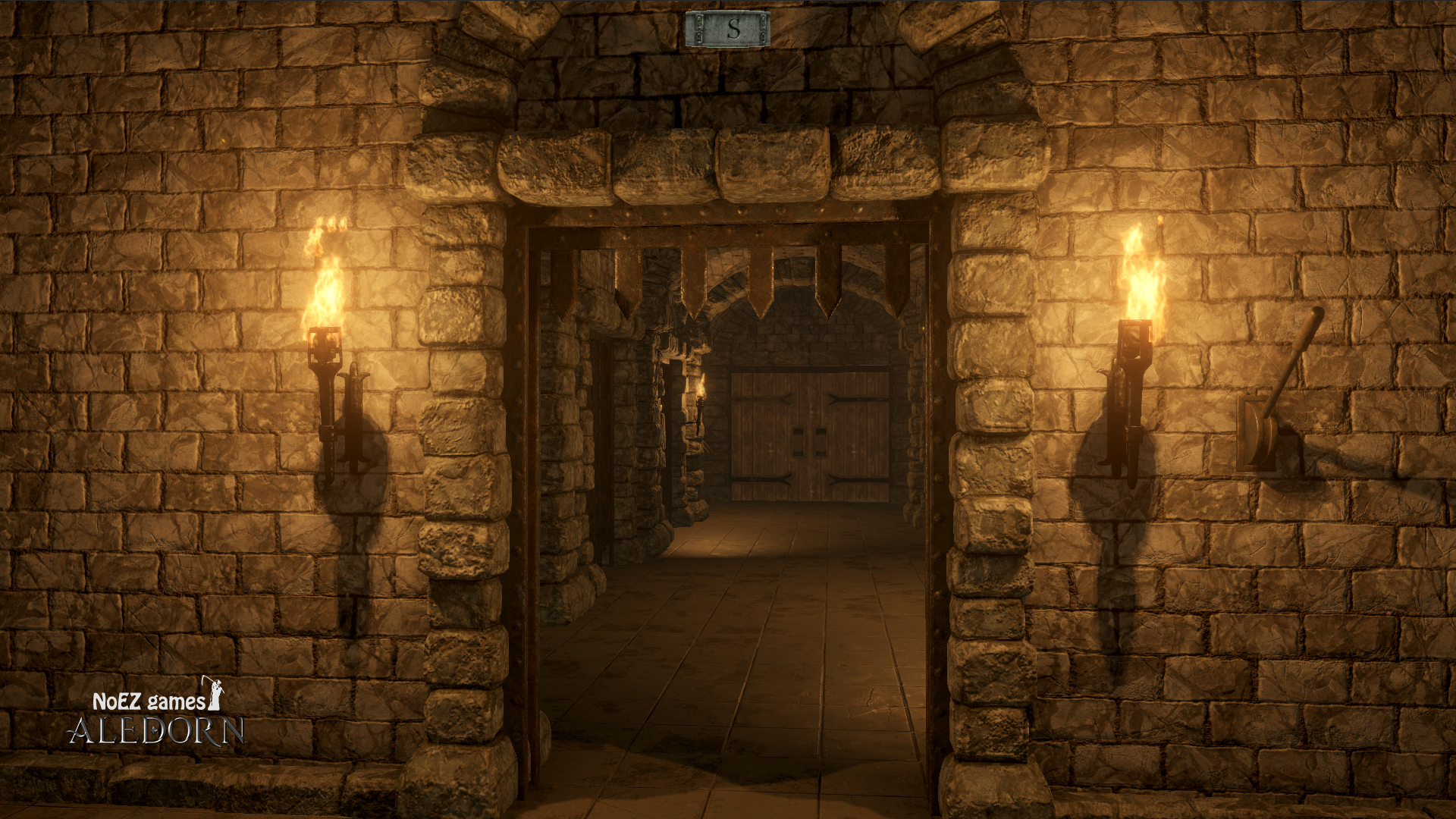 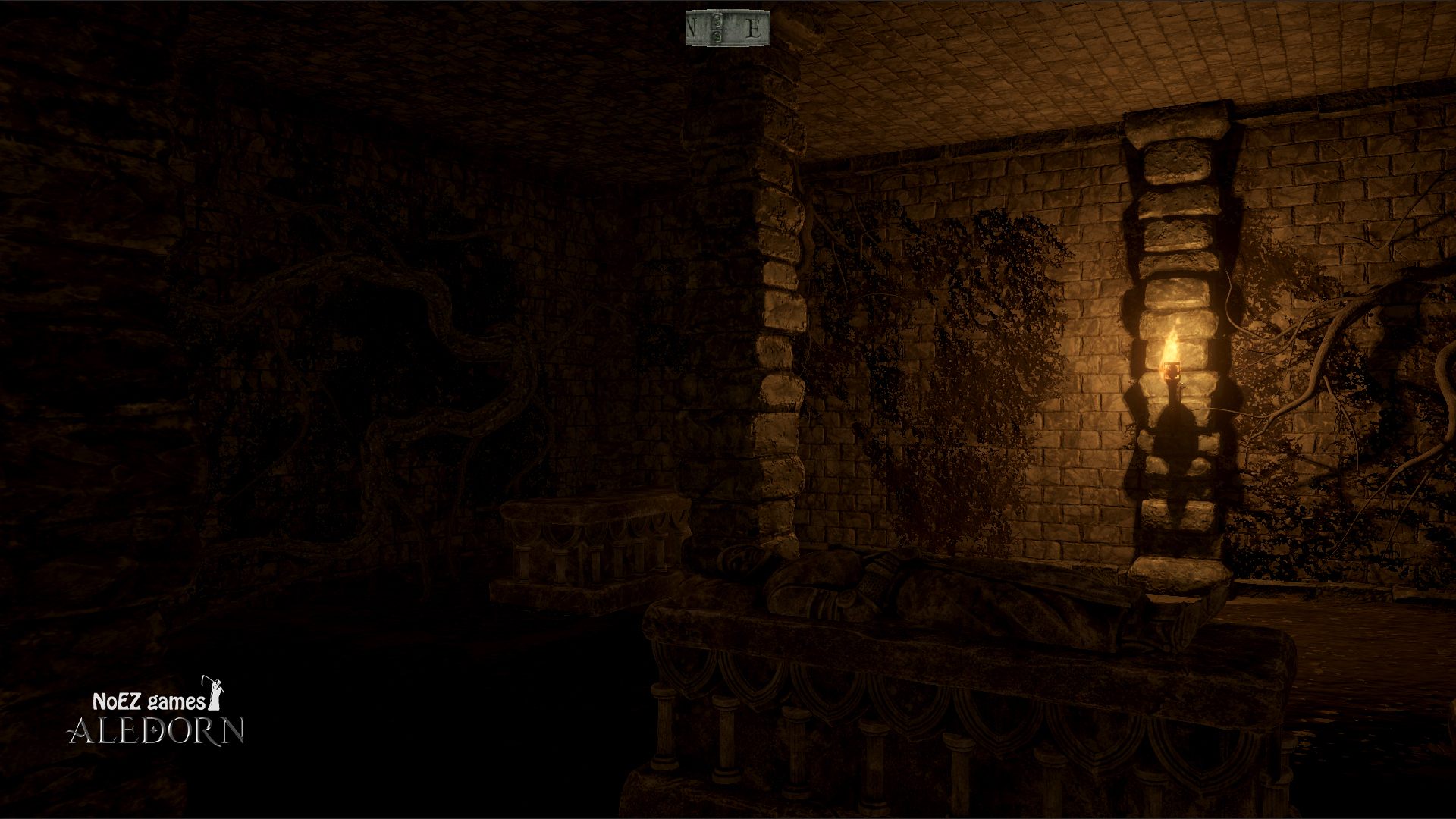 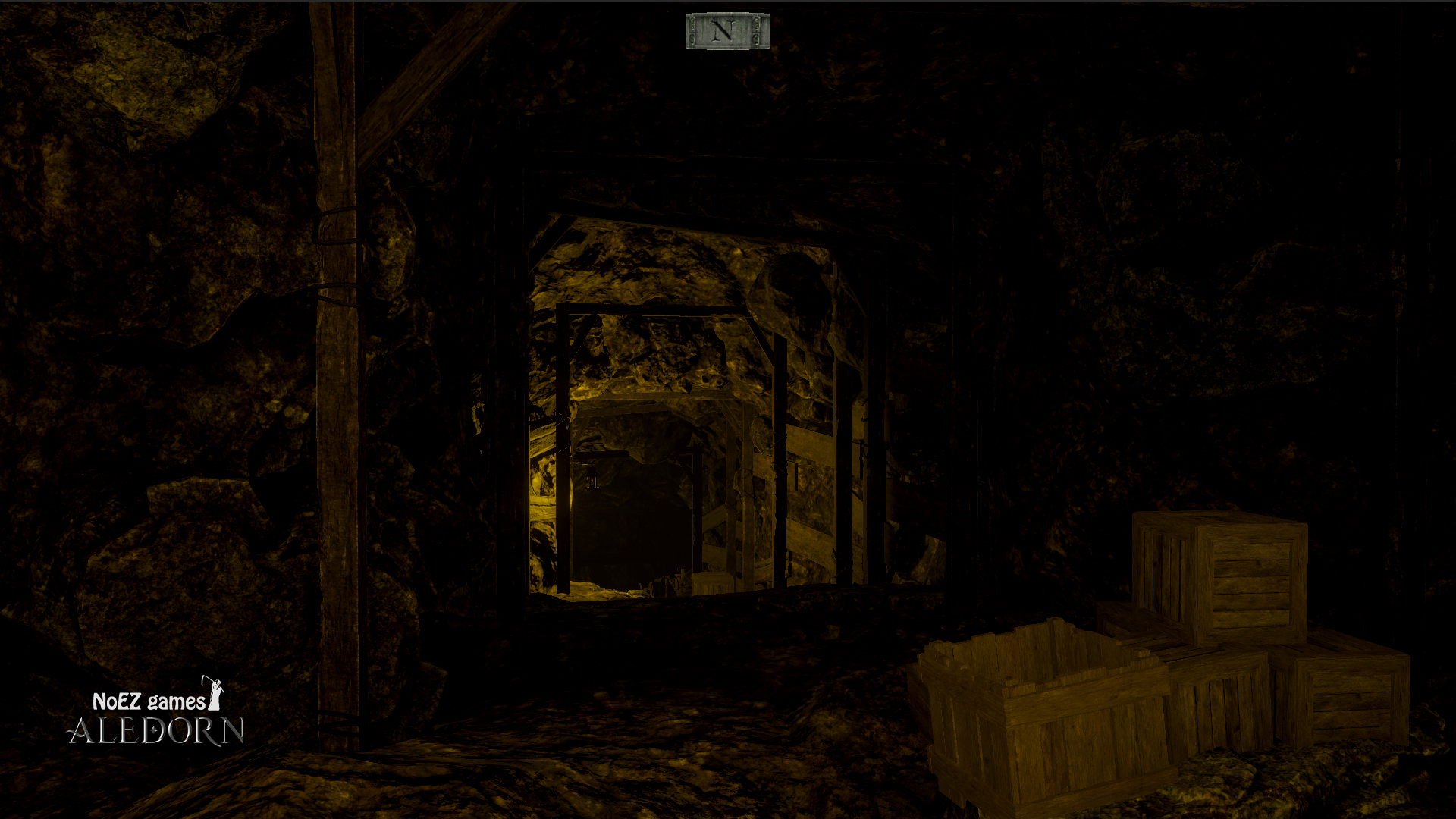 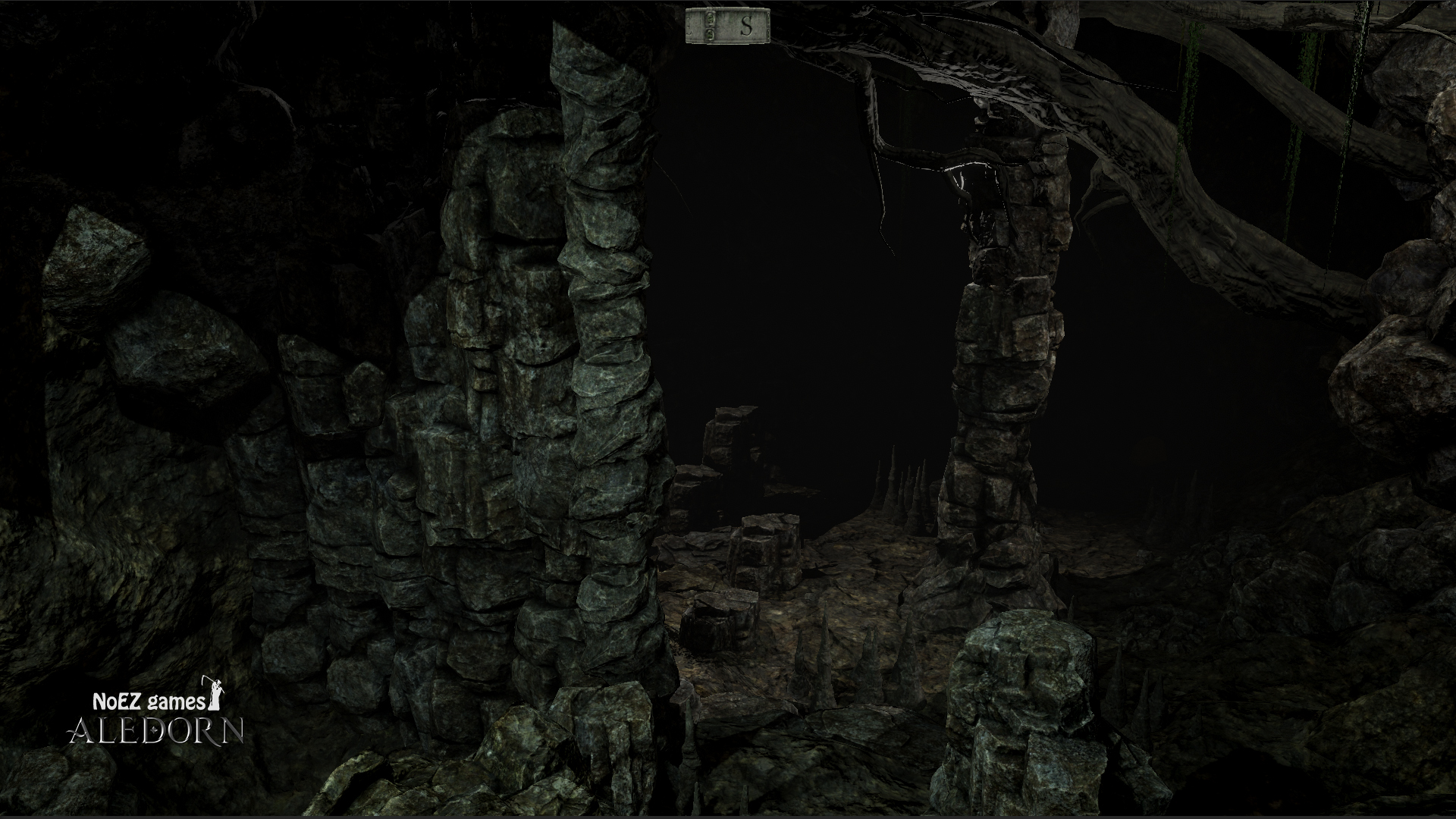 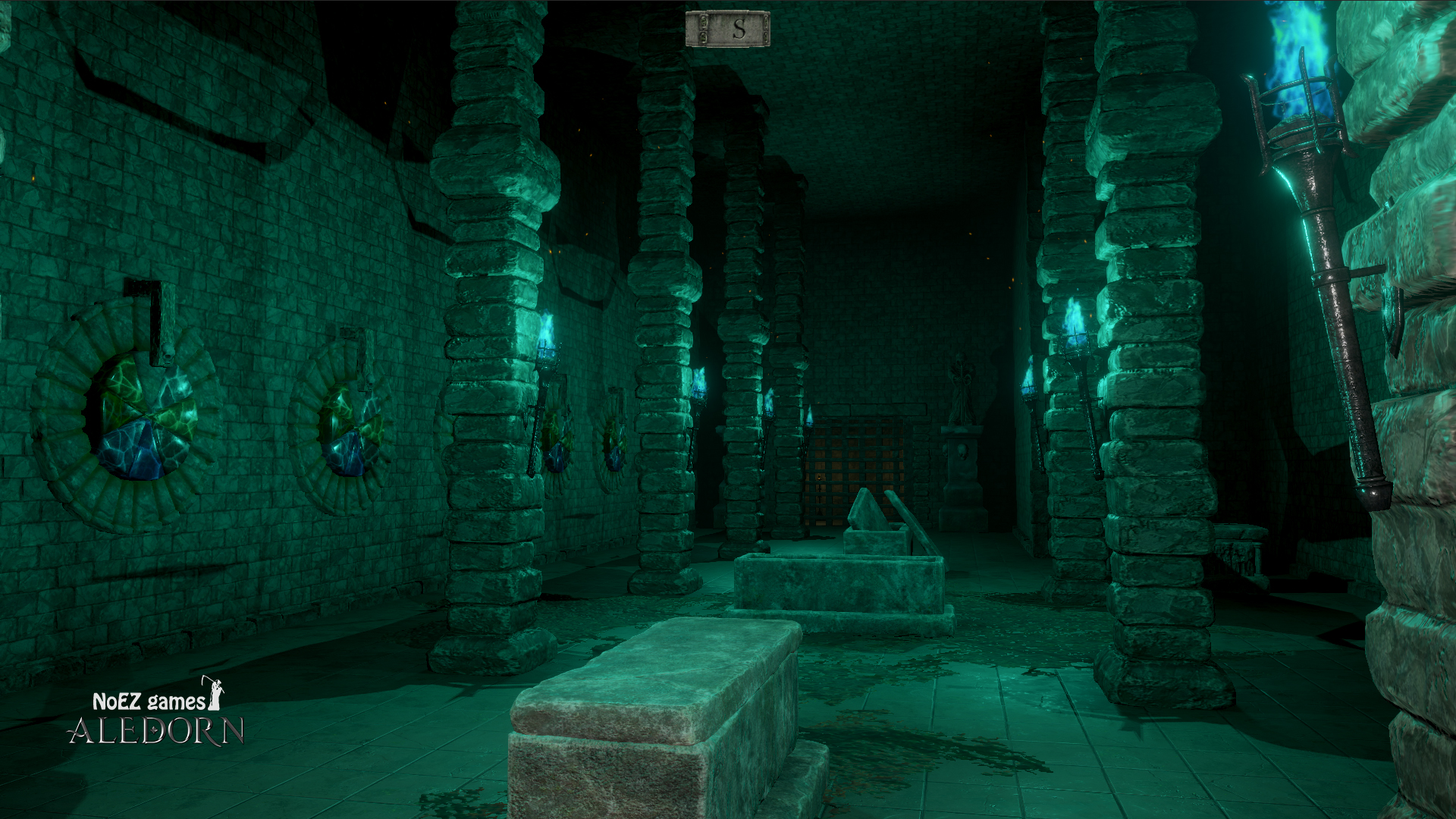 As I worked on level design I decided to make a short video to show you how I create locations in Unity. It is probably going to suck if you don’t have an ultrawide screen, dual monitors, or a big TV, sorry about that, but I am used to doing the work on multiple screens. CZ only.

The game will contain other interactive animated objects as well, for example special containers, piles of rubble, piles of bones, creature den, etc. See below.

At the end of this update I would like to mention that we have reached an important milestone in the game development: We can see the light at the end of the tunnel! (meaning Chapter One) After walking a long and crooked path, beset by many ill events, we can see the project finish in the distance. Yes, still very far, but we can see it nevertheless. At this moment I feel confident enough to proclaim that we plan to release Chapter One in Q2 2022 and we will invest maximum effort to deliver on time.

That being said, I will add a caveat – there are two things that could delay the whole thing significantly. First is the translation, as are building the narrative in our native Czech, we will need to localize to English at minimum. Second point of failure is testing and debugging, as it is close to impossible to divine how much time that would take, cannot estimate how many bugs we have built in so far. 😉

Thanks a lot for your continued support, stay tuned in and check out our progress on FB, which is where our smaller updates typically go. Cheers!