With the first version of the game design document complete (GDD ) I expected nothing less than to get at least another two members of the team and a graphics programmer. I myself at this time knew nothing of the programming or what graphics are concerned, and only knew the very basics of solid modeling (which is for gaming absolutely useless – as models are created with hundreds of thousands of Vertices – modeling for the engineering industry).

Well then, what could I do better than to look among friends. Of course, I first went to see friends from Disney . They showed me a few simple engines and recommended some next steps . However, no one had the time to help me with my game. Furthermore, I threw up a network between the players or friends with whom I play, and I played a variety of online games . And it is here I met the Arbiter – a programmer who was no amateur 🙂

Ok , so I had a programmer , now what was only left was graphics. How to get someone like that at all ? Well, since I was still a student of CTU , so where better to start than at school? So I threw a few ads up and even had the occasional comment, but usually it was not the deal, mainly through an inability to communicate and other problems.

For a long while I failed to get any interest. In parallel with searching , I enrolled for a 3DS Max and Arbiter course, meanwhile testing various ‘free’ software ( blender , human builder:. Through the combination of our skills we began to develop the first graphic in the game . Of course, I still kept looking for extra graphics 🙂

It once happened that I was at a social event, I ran into a man whom I have not seen for some time and of course I also got talking about the development of our game. She told me about her brother, who apparently plays with graphics and may be interested in our project. I got his contact, and to our team was added our first graphic artist – Jarda Š., who also worked well with Unity (the engine we had chosen for the creation of our games by our programmer Arbiter).

Soon I got the first models of buildings, objects and environment from Jarda, and it was shaping up to be the first truly great scene. It is the capital of LIM.

So we have the minimum number of members for creating games. A game designer, programmer and graphic designer. So we got started with the creation of a real scenario, sketching out first drafts and concepts. Whether for combat mechanics or for the environment. Furthermore, I still continued to look for other team members. Surely we would need more graphics, not only 3D but also 2D texturers or other artists, to art-sketch.

At the same time began the first problems. For models that use the power vertex’s, moving the hexes is not as simple as we had thought and more and more problems emerged that are inherent to any game development.

Over the next few months, I managed to recruit a few other candidates, but unfortunately they just stopped communicating.

Working with us while being preoccupied with other projects (working part-time elsewhere, finishing a thesis, writing final exams, etc. ..), Arbiter works full time elsewhere too and the game is programmed only in the evenings, but proceed we did. When suddenly Jarda announces that he is forced to terminate the partnership with us, and that he is to work on some other project of his own. It was a heavy blow for us, ’cause he was the one who worked more or less all the time. Lim created the first basic concept of a 3D city environment, made the first dungeon, and much much more. 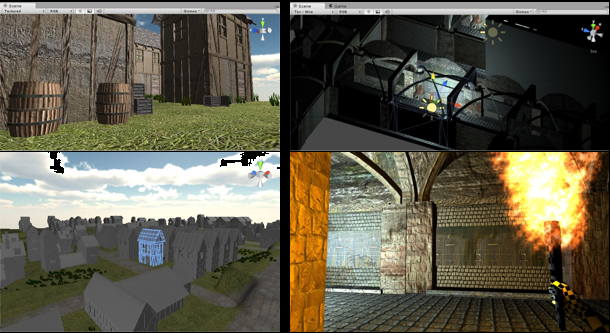 So I was therefore forced to start a little harder to raise potentials for new graphics. At the same time, I enrolled in the spring on several courses (Unity, 3Ds Max, C, etc.), where I hoped that not only might I pick something up, but I also that I would get to know people who may decide to join us at a later stage. That’s how I was hunting for by other colleagues, but I’ll leave for another part of my blog.