Aledorn.
/ Blog - EN / Loss of illusions and leaving the team21

Loss of illusions and leaving the team21

The new supervisor became cataclysm for great changes within the team. A lot of stuff started to be revamped, project structure got an overhaul, work with prefabs got changed, etc. We reopened game design as well, including the size and scope, we needed to minimize and optimize in order to have at least hope of completion. Initial design was simply too ambitious for indie team. We had to scratch a lot of things.

Despite a good restart, things started to grind down after couple of months, part of the problem was that the new supervisor had refocused on personal issues at homefront. At the same time we lost Yeve, our 2D graphics designer.

We tried to keep going, but we started to run into the same sets of problems we had before, in my case lengthy location design – I did prepare locations in form of a map and description and passed it on with additional comments to Daniel, who then followed (more or less) the documentation, created location, passed it on for review, which Ive done and sent him bug report.

This “system” didnt quite work.


What did really annoy me were recurring bugs, you could see the same errors and mistakes in various locations. Everything was done in rush, with little regard for quality, so we uncovered bugs, sent them back, got a quick fix (that often broke other stuff), rinse and repeat. Truly time eating and toxic approach. 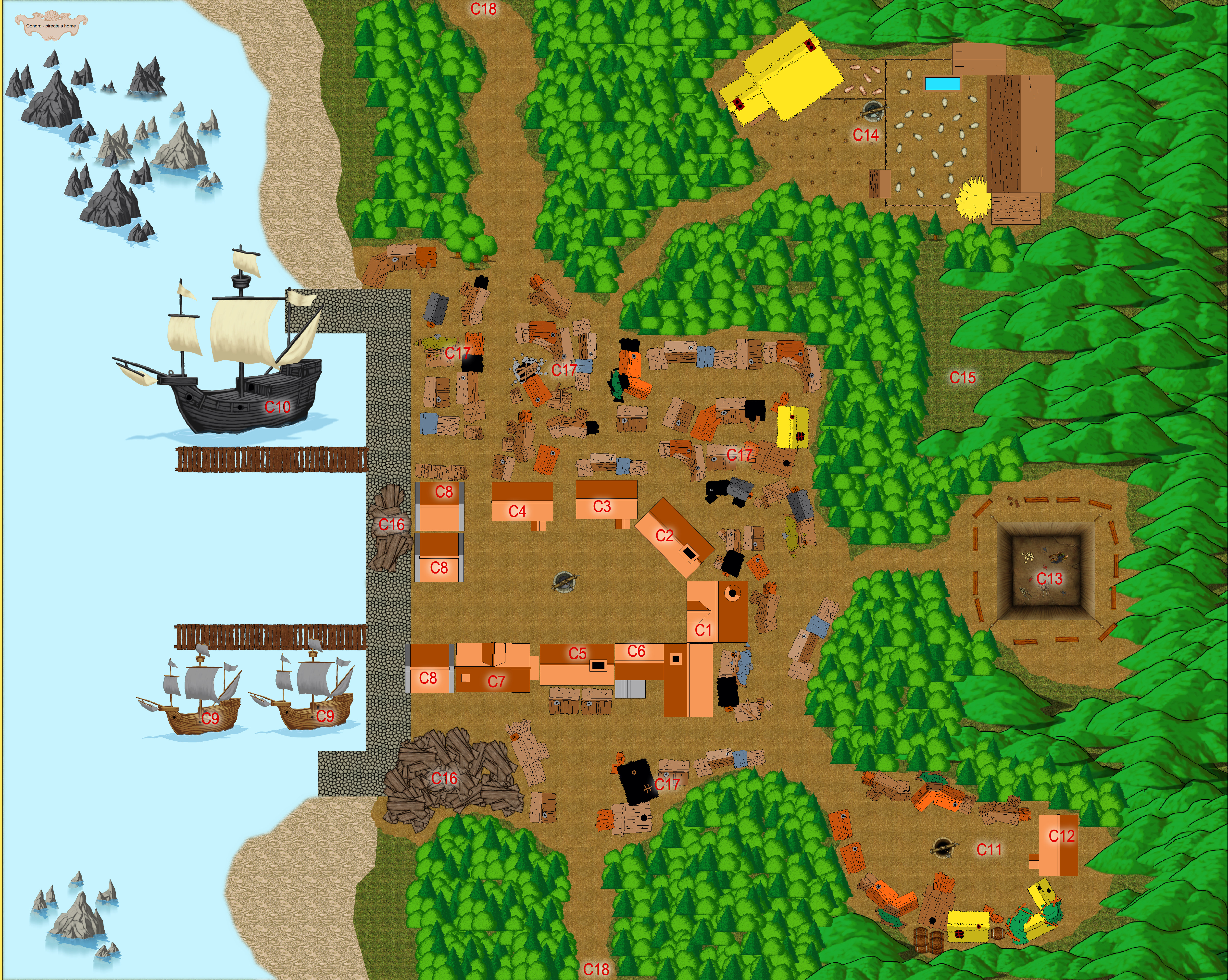 Picture 1 – Example of Port of Condra


This was not the single issue we were facing. Our programmer didnt have the characters and animations he needed for the combat system. The same situation was with items – weapons and armor, potions, food, herbs, equipment, etc. We were waiting for Daniel all the time. He claimed that we have everything. Technically correct, yet very little was in usable state. This state of affaris driving both myself and Arbiter nuts, yet we still lived under impression that we cant finish the project because Dan does all the 3D graphics and level design.

And then summer 2019 came, we were discussing latest batch of locations with the same set of bugs as the previous one and Arbiter showed me how he is rather fixing everything himself than returning it do Dan for overwork. At that moment we asked ourselves question whether we cant do it ourselves – and better. The answer was positive, so we decided to finally leave Team21.

We started to sort out the asset database and in matter of days we saw more tangible results that in months that passed by when Dan was in charge. We found some interesting assets and I started ti build my first scene out of that. And again, to our surprise, everything went quick and smooth. On top of things, by eliminating Dan, locations we started to get were much more fitting the overall concept.

We started to buy new assets and started to sort everything in an intuitive way, so anyone can navigate through it easily. Tags, textures, layers, material, everything fall in place, this made the work significantly simpler for our programmer and the development became more effective.

Of course negatives came with the breakup. Main problem was that lot of work did belong to Team21 (and by extension to Dan, as the owner of the company) and we could no longer use it. This was mainly 2D graphics from Yeve and music from Mark. We also lost access to most of asset database and Kickstarter resources. As a matter of fact, we never had access to these, as Daniel guarded it jealously.

But as the saying goes: “Everything bad is good for something”. Fact that Daniel blocked the contract helped us in the end. By never being official members of Team21 (funny, isnt it?) we retained rights to our own work, so all the story and game design are 100% mine and Arbiter owns the code.

And thus our years long journey with Team21 came to an end. But not Dungeons of Aledorn, now rebranded to just Aledorn.